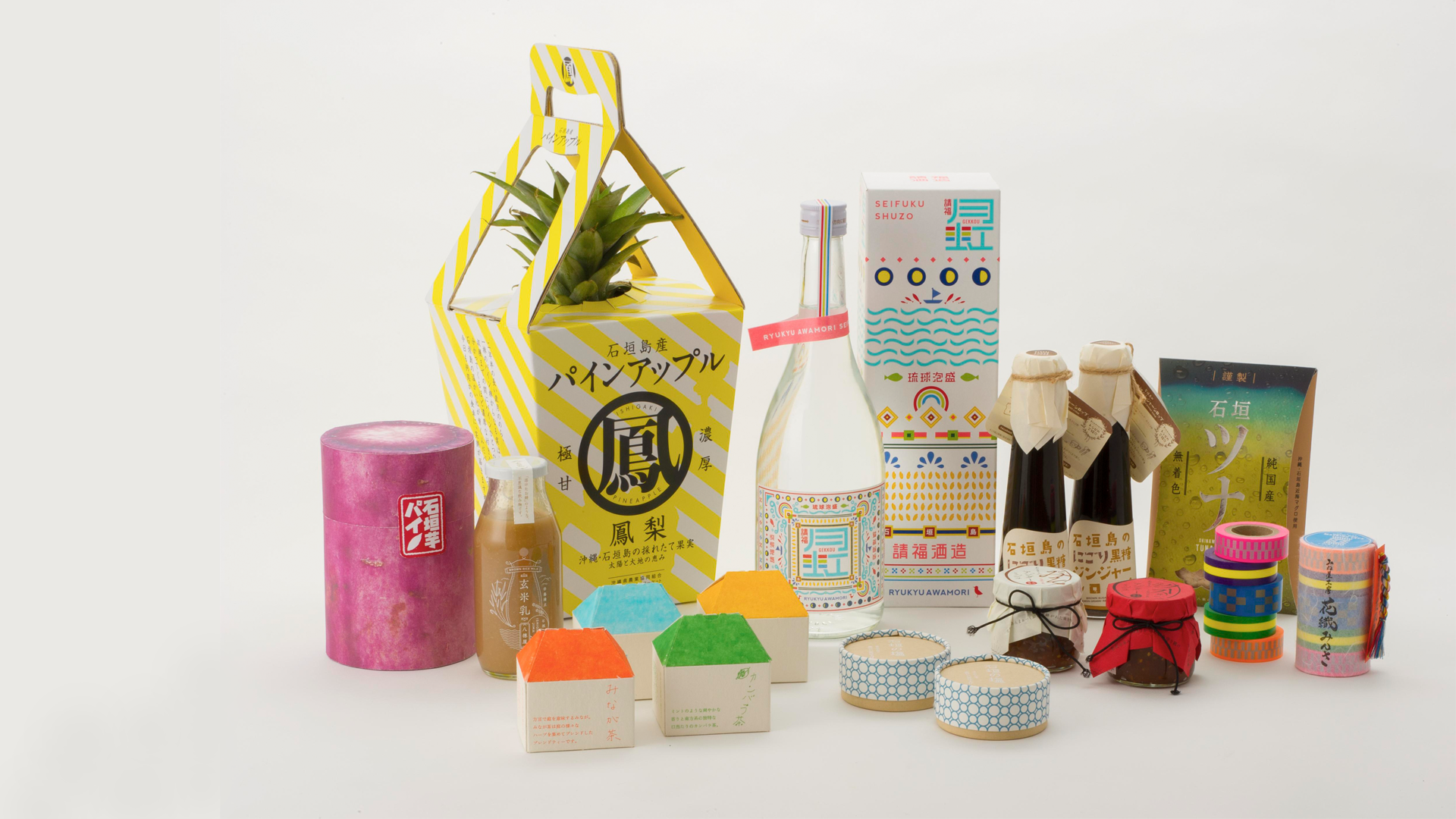 Create empathy for the story of Ishigaki Island with souvenirs. A design package award for local products that resonates with inbound visitors as well.

Ishigaki City in Okinawa relies on tourism as its main industry. Tourist numbers have increased since the opening of the new airport and on the one hand improved the economy, but left open the issue of whether tourists were provided with an experience that would lead to the creation of attachment to Ishigaki Island and encourage repeat visits. The person in charge felt a connection with “Roooots” and approached Loftwork to hold a design award. Not only did Loftwork hold the award, but it supported the organization and implementation of the measures to secure the quantity and quality of the entrants to make the award a success.

This is the “USIO DESIGN PROJECT” which we will be introducing.

・Planned number of awards given/ Number of entrants: 10 awards/431 entrants

・5 out of the 10 awarded products will win the package design category of the 2016 Golden Pin Design Award.

A total of 204 people and 431 products, including people from overseas entered the competition.

As tourists from Taiwan are one of the major sources for tourism in Ishigaki Island, judges were also invited from people working at the Taiwanese Center who are knowledgeable about the Taiwanese creative scene. We also asked people from Japan who are knowledgeable in unearthing the wonders of the local area through design, such as Mr. Toyama, the CEO of Smiles, and Ms. Isamoto, who runs a company commonly known as “Ritokei”.

Issues and background information for clients

Ishigaki Island is popular and famous as a tourist spot and as a resort. While on the one hand tourists are thought to have increased with the opening of the new airport and the arrival of low-cost airlines, there are questions on how many people who visit the island become attached to the rich nature and the personality of the people of the Ishigaki island and would visit again regularly while cherishing such thoughts. The question of how to increase such visitors remains open.

In addition, when looking at businesses on the island, only a small number profit from tourism. Thus, another issue was how to create a system in which more people would be able to feel enriched from increases in tourism.

It is said that a third of visitors’ travel budgets are spent on souvenirs and not only does this directly boost the local economy, but we also believe that stronger communication will be born out of such purchases rather than simply using information as a way to connect the people from the island to people from outside it. This is why we started this project as a package design project for souvenirs.

Why we decided on an award format

Loftwork has worked on the“Roooots Local Specialty Redesign Project” four times since 2008. This project was held in coordination with the International Art Festivals (Echigo-Tsumari Art Field/ Setouchi Triennale) held in the local area. People were invited to attend the art festivals in areas where depopulation and the aging population are major issues. It was aimed to energize local industries by selling designs of the local specialities suited to the target audience as souvenirs.

This time, we held the awards with such projects as a benchmark and based on the issues and characteristics of Ishigaki Island as a way to improve on our previous work.

What was done in the project

From the beginning of the project, our actions to bring a new angle to Ishigaki Island’s tourism had the following three themes;

1. We want to bring in external perspectives. We also want to maximise the incorporation of design strengths.

2. We want to promote the attractiveness of the island through its goods. We want to take on the role of promoting local goods more widely, and incorporate this into local goods.

3. Want to incorporate Taiwanese perspectives, since Taiwan has a strong connection to Japan in terms of both geography and history.

Ishigaki Island already boasts strong popularity and high recognition and thus it is a truly energized region with many people deciding to immigrate. While it has its own unique issues, at USIO, it was necessary to create messages that fit the context of the island and new systems while utilizing the same strategies at Roooots.

Therefore, Loftwork suggested making the entire process as open as possible by using specially created websites and social media accounts. We aimed to show a different aspect of Ishigaki Island and its creativity by taking the shape of a plan to create craftsmanship and re-design local specialities, while promoting detailed information on what was taking place. In addition, we held an event that involved the creator network in coordination with the Taiwanese team at a digital creative café called FabCafe.

How the award was made successful

Create a team consisting of people from Ishigaki, Tokyo, and Taiwan

Field research and a kickoff MTG were conducted at the start of the project by a team of people from Tokyo and Taiwan on Ishigaki Island. We built a team that could work together to overcome the physical distance.

Create a system in which high-quality work is submitted

It is necessary to raise awareness of the award to outstanding creators, deepen their understanding of Ishigaki Island and come up with strategies and initiate them to make such creators motivated in submitting their work to gather as many high-quality works as possible .

Recognition of the award:

To create many links with outstanding creators, we utilized FabCafe on top of reaching out to registered creators. We also held a promotional event at FabCafe locations in both Shibuya and Taipei. By involving FabCafe, we were able to contact digital craftsmanship creators difficult to reach from Ishigaki City.

A deep understanding of Ishigaki Island:

We were also successful in following information promotional activities online by deepening connections through people’s words by making direct communication with businesses and those in charge at Ishigaki Island at FabCafe.

Online, we were able to provide such more detailed information which would not have been possible through other types of media. We carefully communicated lesser-known cultures to the Taiwanese creators by having three default languages and this has led to improved quality in the submitted works.

Continuing to communicate what the staff members are thinking will motivate the attendees.

Pictures from an event in Taiwan

Pictures from a workshop in Shibuya

Support in creating a product from the awarded submissions

This was after the awards, but we continued to support the process of the development of the products by having businesses visit the designers whose submissions were chosen. We provided support by facilitating partnerships between the designers and the local businessmen who incorporated different techniques, cultures, and backgrounds into managing the manufacturing costs and designs.